Biophysical researches at ACAS encompass a wide range of topics including charge transport in DNA, proteins, microtubules dynamics, active assemblies in fluids and collective motion. Our research uses a range of mathematical techniques coupled with advanced computer simulations to decipher intrinsic properties of molecular machines such as swimmers, motor proteins, ions channels and transport across soft and biological media like DNA, protein to name just a few.

Currently, our investigations on motor proteins focus on the dynamics of microtubules. These are network protein assemblies responsible for cellular mobility and mitosis; the aim is to deepen our understanding of environmental conditions of the polymerization/ depolymerization processes.

Charge and energy transport in DNA and proteins are investigated using different models. Especially, effects of key models processes on the dynamics are considered such as conformations and inhomogeneities. Analytical results are usually tested by intensive numerical simulations.

As active assembly research activity is concerned, our interests lie on dynamics and transport of molecular swimmers, in particular self-propelled particles, active Browian particles, and, run and tumble particles. Our aim is to provide in simple mathematical rules and conditions prevailing at the order-disorder transition within active systems, and accordingly try to understand how these particles work under different physical constraints. The mathematical formalisms and modeling techniques we employ range from kinetic theory to conservations laws. Using these approaches coupled to exact solutions methods and advanced computer simulations allows us to quantify and measure physical quantities related to transport and stability of the bulk system. 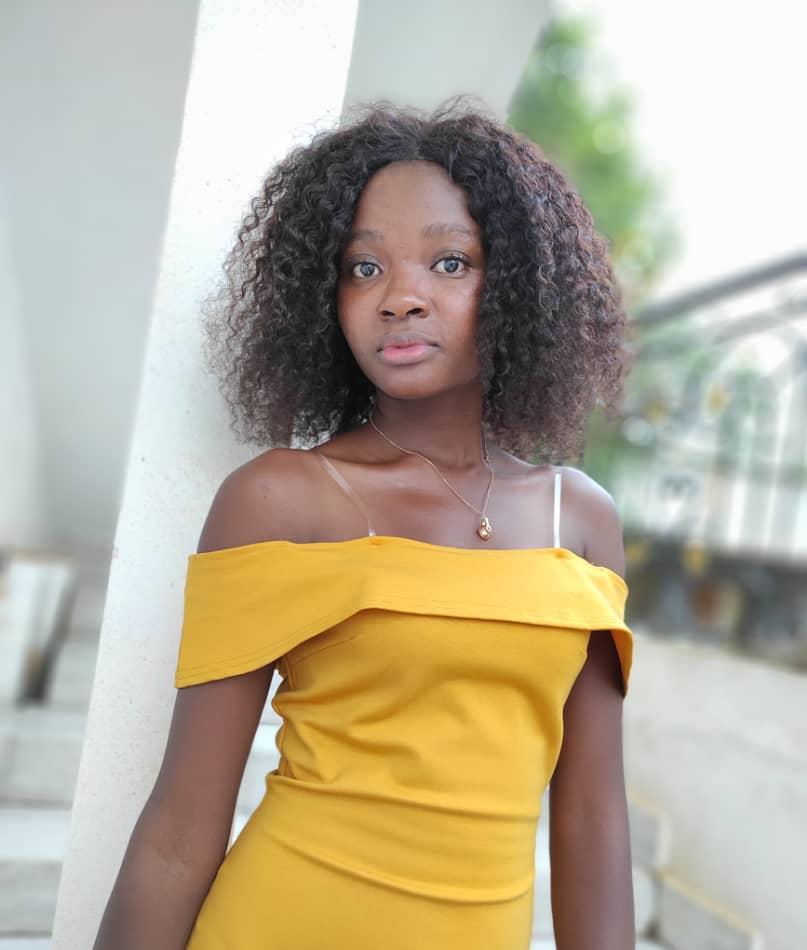 KOMBOU NZOUEBET Arielle was borned at Ngaoundéré, Cameroon. After compliting her primary and secondary schools, she obtained a 'baccalauréat D' in experimental sciences in 2013. From 2013 to now, she has been studying physics at the University of Yaounde I, Cameroon. In 2019, Kombou received a bachelor degree in physics and major in mechanics. She got interested in biophysical sciences and continued her studies within the biophysics laboratory. Now, she intends to obtain a master in biophysics with thesis, on the topic “regulation of glucose insulin system”.

Kombou is also interested in encouraging women in science. She is part of the ACAS project on 'Popularization of research among African youth' that aims to encourage young africans to move to science technology engineering and mathematics carriers. 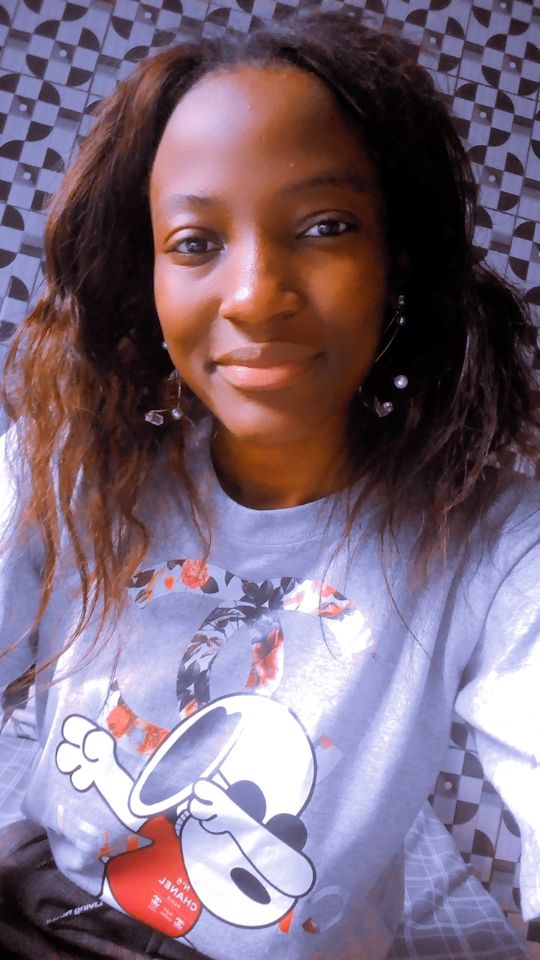 Mvembe Nicaise is from southern Cameroon. She currently resides in Yaounde where she is continuing her University studies. Enrolled in the physics department of the faculty of science since 2014, she obtained a bachelor degree in 2017. With the aim to work on interdisciplinary research topics, she joined the biophysics laboratory in 2018. She is currently completing her master thesis on a topic related to  mathematical modeling of disease propagations.

Mvembe is also interested in encouraging women in science. She is part of the ACAS project on 'Popularization of research among African youth' that aims to encourage young africans to move to science technology engineering and mathematics carriers. 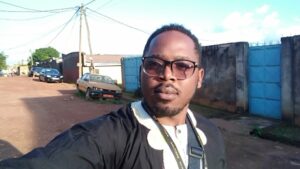 Rostand Tabapsi Kamdem was born in Yaounde, Cameroon. He completed his secondary school studies at the 'Lycée the Ngoulmekong' in Yaounde where he obtained a 'baccalauréat C' in mathematics and physical sciences in 2012. From 2012-2016, he studied physics at the University of yaounde I and got a bachelor degree.  Tabapsi then entered the biophysics laboratory of the physics Department in 2016, he defended a masters degree thesis in 2019. From 2019 to present, he is a PhD student working on the topic of nonlinear dynamics of microtubules.

Tabapsi also part of the ACAS project on 'Popularization of research among African youth' that aims to encourage young africans to move to science technology engineering and mathematics carriers. 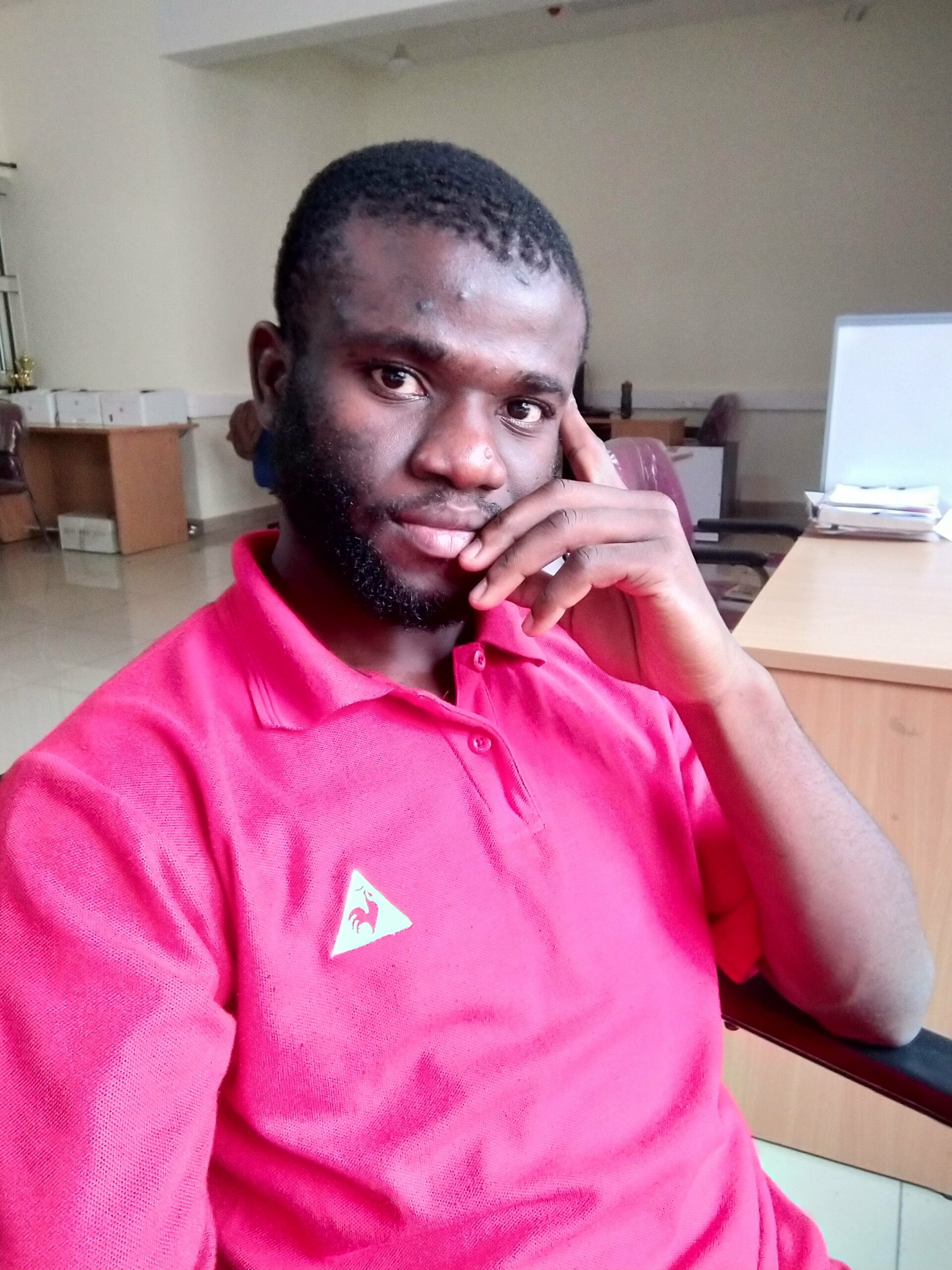 William Kuipou was born in Bandjoun, Western Cameroon. After graduated from Higher School, he undertook his higher education studies at the University of Yaounde I, from which he obtained a Bachelor of Science in Physics in 2014 and a Master Degree by Research in Physics, speciality Biophysics, in 2016. He is actually working toward his PhD studies in the same Institute since 2017.
His is primarily interested is in the field of soft and condensed matter theory, especially the study of non-equilibrium dynamics of active suspensions, self-propelled particles and their hydrodynamics/mechanical properties, self-organization in active systems and waves propagation phenomena. His ongoing
research project is focusing on the determination of explicit analytical forms and the stability analysis of wave structures propagating within systems constituted of self-propelled particles such as bacteria in fluids. He uses a piece wise resolution methods to demonstrate the existence of many family of waves and how their
propagation affects the transport the particles, and the feeding source in a uniform flowing medium. Moreover, he is also investigating the impact of the self-organizational dynamics onto the topology of the medium. In the same due time, since the microscopic description of active systems is also highly appealing, he is using a more local approach to decipher phase separation and particles clustering in a fluctuating nematic field.

Kuipou also part of the ACAS project on 'Popularization of research among African youth' that aims to encourage young africans to move to science technology engineering and mathematics carriers. 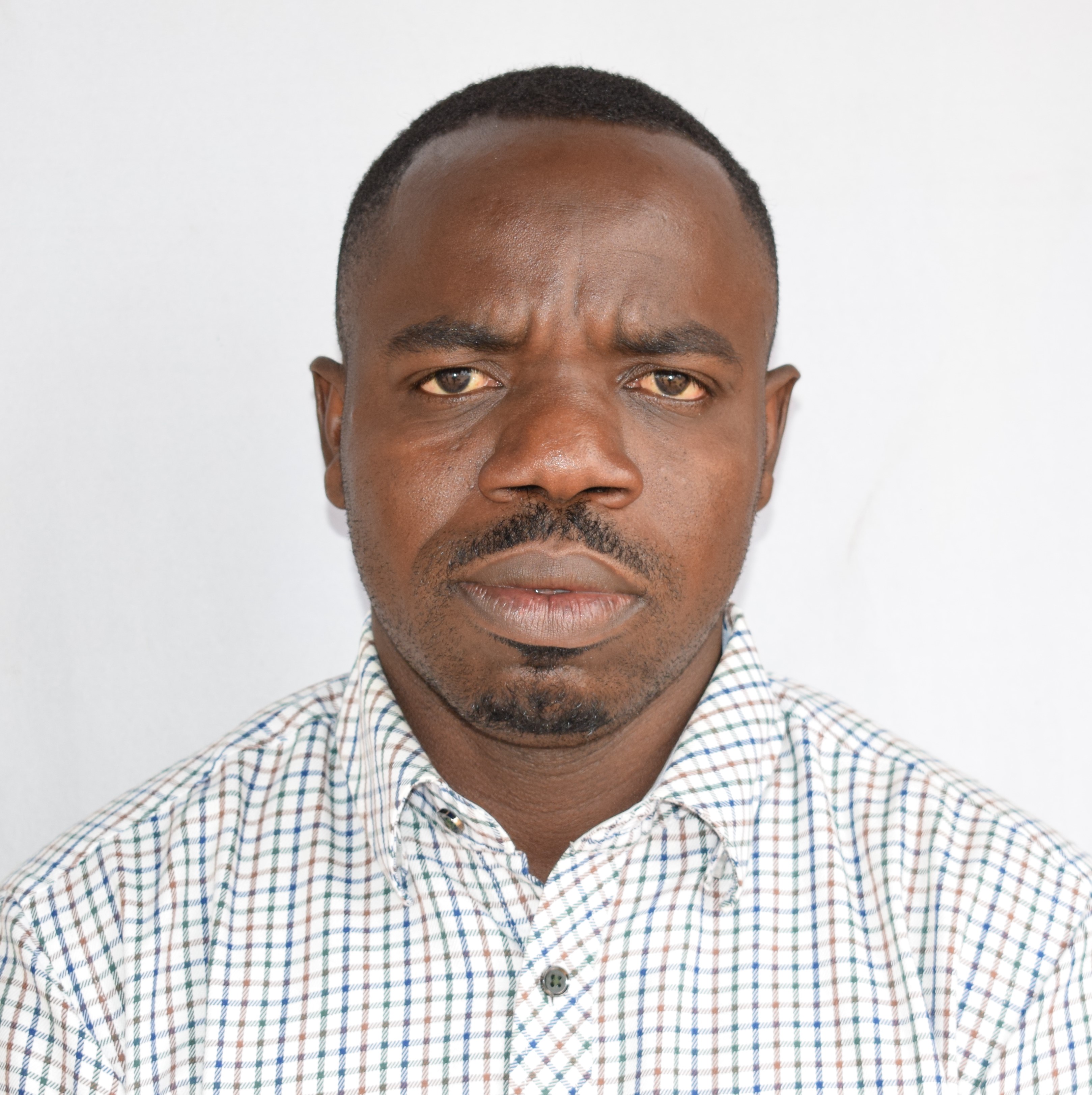 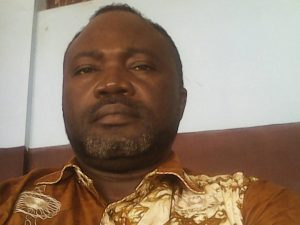 Biophysicist: creator of the biophysics laboratory at the physics department, Faculty of Science, University of Yaounde I 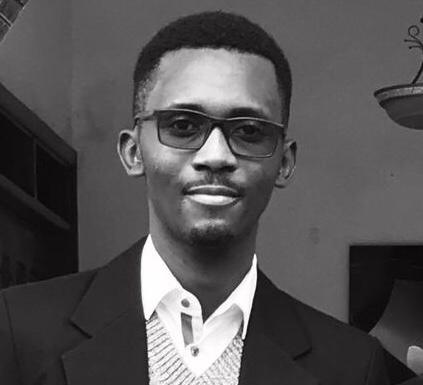 Pavel Arnold Ndjawa Yomi was born in Yaounde, central Cameroon. After his secondary education, he enrolled at the University of Yaounde I in 2012 where he obtained his Bachelor's degree in Physics in 2015. He entered the laboratory of Nuclear physics, atomic and molecular physics and biophysics and focused on biophysics studies and got a Master with thesis in 2018 in the latter subfield.  Thereafter, he continued with a Structured Master in Mathematical Sciences at the African Institute for Mathematical Sciences (AIMS-Cameroon) where he graduated in 2019. He is interested in mathematical modelling of infectious diseases, quantitative evolution and ecology, and data science. From 2018 to present, he has been a PhD student from the biophysics lab working on the topic of nonlinear dynamics of blood flow along vessels under the influence of magnetic field, nanofluids, nanoparticles, and external metabolisms.

Ndjawa also part of the ACAS project on 'Popularization of research among African youth' that aims to encourage young africans to move to science technology engineering and mathematics carriers. 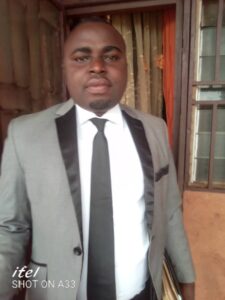 Dr. ONDOUA Rodrigue-Yanick was born in South Cameroon. He obtained his G.C.E Advanced Level Diploma, Government Classical High School of Ebolowa, in the south Cameroon. He continued his graduate studies in the Center region at the University of Yaounde I, Cameroon until obtaining a Bachelor’s Degree in Physics, Masters in Biohysics and finally a PhD in Biophysics in the Laboratory of Nuclear, Atomic, Molecular Physics and Biophysics.  Dr. ONDOUA Rodrigue-Yanick also holds a Secondary and High School Teacher’s Diploma from the Higher Teachers Training College of Yaounde, Cameroon. He started teaching in high schools and today he is a Lecturer at the University of Douala, Cameroon.

His main area is the study of molecular dynamics with applications in energy transport in biological molecules.  Recent works are made through energy transport in α-helix protein chains. From one strand to three stands; the phenomenon of Modulational Instability is used to materialize this energy and numerical simulations are made to confirm the analytical predictions. He also focused on inhomogeneities and long-range interactions in the α-helix where exact solutions are built and their stabilities studied numerically. Several projects are underway on energy transport in proteins with slightly more complex models.

I was born in Porto-Novo where I spent most of my childhood.  I am a undergraduate student in Mathematics – Computer Science at FAST-NATI under UNSTIM, in Benin.  At the age of 20 I decided to enroll in the rank of scientific researchers. I have an interest in the field of Topology and that in the reason why my undergraduate end of  year project relates to:  The K-metric space.

born in Akpro-Missérété, I am an undergraduate student in Computer and Applied Mathematics (MIA) at Faculté des Sciences et Techniques (FAST) in Natitingou. I would like to be part of next generation of great Scientific researchers. I have an interest in the topology which relates specifically to K-metric spaces which is the core of my bachelor project.

I was born in Vakon, Benin Rep.  where I spent my childhood. My interest broadly includes Mathematics and Data processing. I would like to be part of this great community of scientists and researchers. I am currently enrolled in a 3 year program leading to a bachelor in mathematics and computer science. For my final year project,  I am working on the topology metric spaces partial as this serves as a bridge to see how mathematical structures are used in computer science.

I have always been passionate about science and medicine, but I enrolled in a science and technology faculty because it suited best my skills as a mathematician and mathematics computer scientist. I am now at the end of the first degree which leads to a bachelor in fundamental mathematics and computer science. I desire to pursue with graduate studies in analysis or the topology,  applied to IT.