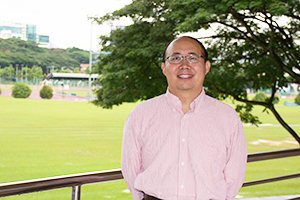 Professor Weizhu BAO is currently a Professor at Department of Mathematics, National University of Singapore (NUS). He got his PhD from Tsinghua Univeristy in 1995 and afterwards he had postdoc and faculty positions at Tsinghua University, Imperial College in UK, Georgia Institute of Technology and University of Wisconsin at Madison in USA. He joined NUS as an Assistant Professor in 2000 and was promoted to Professor in 2009. He had been appointed as the Provost’s Chair Professorship at NUS during 2013 — 2016. His research interests include numerical methods for partial differential equations, scientific computing/numerical analysis, analysis and computation for problems from physics, chemistry, biology and engineering sciences. He had been on the Editorial Board of SIAM Journal on Scientific Computing during 2009–2014. He was awarded the Feng Kang Prize in Scientific Computing by the Chinese Computational Mathematics Society in 2013. He has been invited to give plenary and/or invited talks in many international conferences including the Invited Speaker at the International Congress of Mathematicians. His current research interests include Bose-Einstein condensation, highly oscillatory partial differential equations (PDEs), solid-state dewetting, computational quantum physics and chemistry, multiscale modeling, simulation and applications, computational fluid dynamics, numerical methods for problems in unbounded domains, numerical analysis/scientific computing, computational and applied mathematics in general. Professor Weizhu Bao has published more than 125 original papers in pier-reviewed journals which have received more than 5000 citations. His  h-index is 37 while his  i10-index is 88 according to Google Scholar.