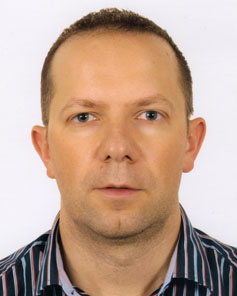 Rafal Lochowski was born on August 31st 1975 at  Skarżysko-Kamienna, Poland.  From 1995-2000 Lochowski studied mathematics at the University of Warsaw where he obtained his bachelor  and a Masters of Science with emphasis on insurance mathematics and probability theory. He continued in PhD, from 2000-2004 he studied probability theory at the Institute of Mathematics, University of Warsaw and defended his PhD thesis at the Faculty of Mathematics, Informatics and Mechanics, University of Warsaw in 2005.  In 2015 Lochowski obtained an Habilitation degree for his scientific achievement on the theme ‘Truncated variation – its properties and its application in the theory of stochastic processes’ which consists of a series of research articles, Institute of Mathematics, Polish Academy of Sciences.

Lochowski has been with the Warsaw School of Economics since 2005 and has been occupying different roles such as Lecturer  01/12/2005-28/02/2006 (teaching and research), Assistant Professor 01/03/2006 – 31/03/2016 (teaching and research), Associate Professor 01/04/2016 to present. Lochowski received some awards: Scholarship for outstanding students of the University of Warsaw (1996-2000), Ph.D scholarship from the Institute of Mathematics, University of Warsaw (2000-2004), scholarship of the Institute of Mathematics of the Polish Academy of Sciences for outstanding young mathematicians working on Ph.D dissertation (2003 – 2004), Warsaw School of Economics Rector’s prize for habilitation (2016),  Warsaw School of Economics Rector’s prize for Ph.D. dissertation in 2006, Upper and Lower Bounds for Stochastic Processes, a research grant sponsored by the National Science Center in Poland, investigator (2016-2019). He has delivered lectures very widely in different Institutes across the globe and is also an associate research fellow at the African Institute for Mathematical Sciences (AIMS) in South Africa.

The research activities of Lochowski focus on  financial time series, truncated variation of irregular paths, random multilinear forms. He has published a substantial number of research papers in pure and applied mathematics. Recently, Lochowski got interested in applications of topology in model-free finance. His expertise in research is well recognized as he is currently a reviewer for many important mathematical journals.

There are research students who have obtained their master degrees under the supervision of Lochowski. Presently another couple of students are pursuing their research for Ph.D degree under his supervision.